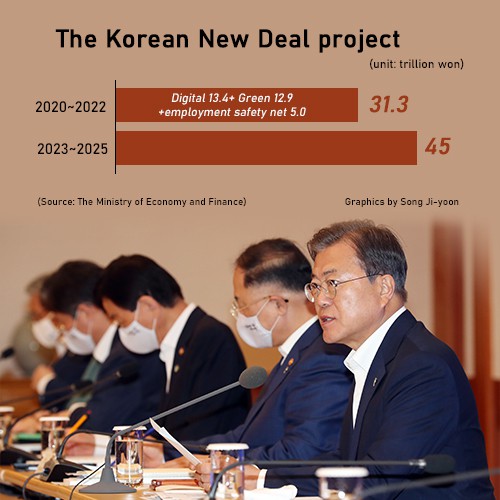 The government of South Korea has announced plans for a multi-trillion won “new deal” stimulus package which will target digital technologies such as AI, 5G and blockchain. The “new deal” aims to tackle the Korean economic crisis triggered by COVID-19 while laying the “groundwork” for long-term prosperity.

Korea’s already-faltering economy was hit hard by the pandemic, and youth unemployment now stands at 10%. In justifying the “new deal”, President Moon Jae-in characterized Korea as a “follower economy”, “unequal society” and carbon-reliant nation in desperate need of reform from the ground up.

He framed the program as one that will revitalize Korea in the long-term and transform it into a global “pacesetter”. Moon estimated that the ambitious project will cost 160 trillion won ($133 billion) over 5 years and create 1.9 million new jobs.

Its two main pillars are the “green new deal” and the “digital new deal”, which respectively pledge to turn South Korea into a low-carbon society and harness the potential of technologies such as AI, 5G, and blockchain.

Blockchain technology will be used by both the green and digital new deals and play a role in new systems for online voting, the welfare state, and renewable energy, reports local news outlet Chosun.

For the “green new deal”, blockchain technology will facilitate transactions between new and old power generation companies based on transparent and immutable data. It can also be used for bidding and settlement of renewable energy transactions.

On the digital side, blockchain will help with the allocation of benefits for low-income individuals. It will also provide the basis for a new online voting system that will be used in the 2022 presidential election.

Other blockchain-related plans include the use of distributed identity (DID) in public services. This has in fact already started with the recently announced driver’s license verification service and Busan City’s DID service. But the aim is to create an integrated public DID platform so that users don’t need to install multiple identity apps on their phone. When it comes to DID, Korea is the world leader, but it’s multiple solutions need to interoperate.

South Korea has been at the forefront of blockchain innovation for some time. Two years ago, the government announced a tax break for companies specialising in blockchain. Meanwhile Busan, Korea’s second most populous city, recently declared itself a “regulation-free blockchain zone” and implemented a blockchain-based logistics system into its bustling port.