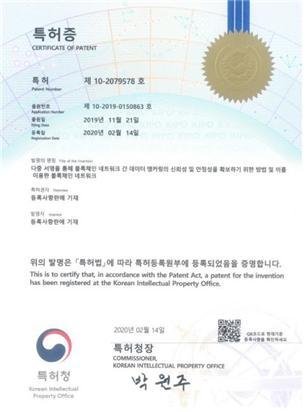 KOMSCO (Korea Minting, Security Printing and ID Card Operating Corp.) announced on February 2 that it had obtained a patent on blockchain anchoring technology. As a result, KOMSCO has applied for 12 blockchain technology patents and it has secured 7 patents among them.

The patent technology, applied and obtained with a blockchain startup, is a technology that ensures the reliability and stability of data anchoring between blockchain networks through multi-signatures. ‘Anchoring’ is a function that stores data on other blockchain platform.

The reason KOMSCO strives to secure blockchain technology patents is to develop a service that proves the authenticity of online and mobile public information in the era of the Fourth Industrial Revolution. Blockchain technology is a distributed data storage technology that makes hacking difficult by connecting and storing information with each block like Lego block.

KOMSCO has already built ‘Chak’, public blockchain platform, and is providing ‘mobile voucher service’ to six local governments including Seongnam, Siheung and Gunsan city. They can conveniently pay and manage social subsidies for youth and children as well as mobile voucher through ‘Chak’.

Hong Chang-seok, head of KOMSCO’s technology department, said, “Blockchain technology is a core technology can prove the authenticity of public information online and on mobile.” “We will try to increase the trust of our society in the era of the Fourth Industrial Revolution,” he added.