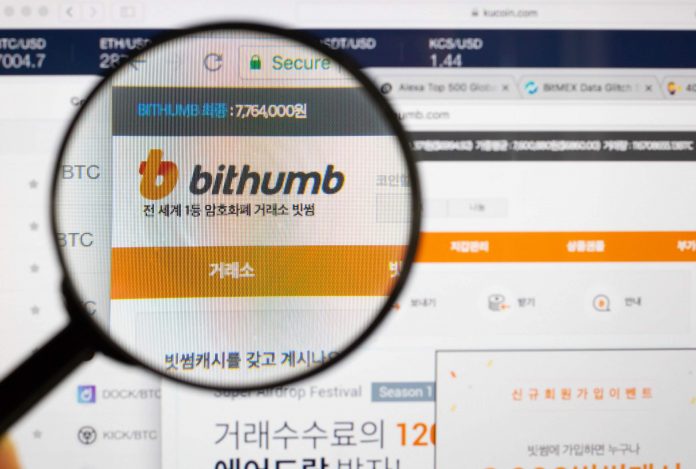 The country’s tax inspectors visited the exchange’s headquarters in Seoul, as part of a push to increase taxation and compliance, the National Tax Service (NTS) said. The current investigation extends to domestic and international transactions of Bithumb Korea, Bithumb Holdings and affiliates.

Although no specific taxation standards for crypto assets have been put in place yet, the finance ministry considers re-classifying returns made on cryptocurrencies as a type of ‘other income’. This places crypto profits in the same category as those earned from lotteries, which has a 20 percent tax rate.

Despite the high tax tag levied on ‘other income’, it remains better than being taxed as a form of capital gains as it is currently treated, which calls rates of up to 42 percent.

Historically, South Korea is one of the hottest investing and trading markets for cryptocurrencies. However, authorities have been hesitant to regulate the virtual asset class, due to their belief that cryptocurrency regulation could lend legitimacy to the sector.

Upon completing real-name verification and partnering with a local bank, digital assets platforms are required to acquire a license from the country’s Financial Intelligence Unit (FIU). This is a unit of the Financial Services Commission (FSC), the country’s top financial regulator.

Bithumb was in the news recently after its former chair, Lee Jung-Hoon, was acquitted on charges of defrauding the business of $70 million during the acquisition of the South Korean crypto exchange.

The single-largest shareholder of Bithumb’s parent company was on trial for charges of fraud after BK Group dropped its plans to acquire the crypto exchange.

According to the prosecution, Lee allegedly took $100 million from Kim Byung-gun, the founder of a line of cosmetic surgery clinics, to buy out a 50% stake in Bithumb. The money was paid as a “contract fee” after reaching a deal to manage the exchange jointly following the acquisition alongside the promise to list a new token at the exchange.

Yet, the Bithumb Coin (BXA), which was issued by BK Group-linked Blockchain Exchange Alliance, was never listed and the consortium didn’t take over Bithumb as it failed to pay the balance. In 2019, Lee accused his ex-partner in Singaporean court of selling BXA tokens on his behalf. A year later, Kim filed a complaint against Lee in a Korean court.