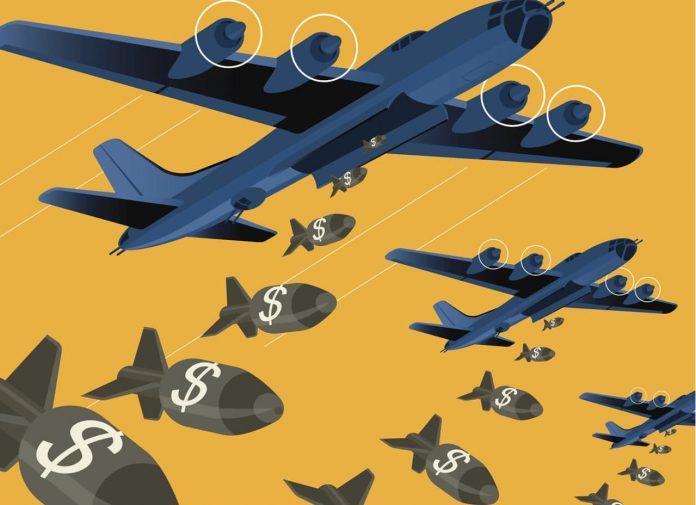 In the hierarchy of news, at the top are stories of violence. At the very top of those stories are stories about war. Nothing upends life quite as viciously as war. People are displaced and killed. Homes and possessions are destroyed. Institutions and belief systems are ripped apart. When the primary belligerent of a war also happens to be a nuclear superpower—as Russia is—every corner of the globe takes notice.

Stock markets slid while Russia prepared to invade Ukraine and sank further once boots actually crossed border last week. Most markets saw some recovery going into the war’s first weekend, but investors need to remind themselves that the chaos has barely started. The air is thick with unease, there are moving parts everywhere, and markets will likely see much more erratic spikes and falls as the war presses on.

Thus far in the war’s infancy, safe haven assets such as gold and crypto have experienced a modest rise. This may have surprised some economists, but dramatic movement in the future is likely. As nations reassess the threat represented by President Putin, it is becoming clear that economic warfare against Russia is currently the preferred course of action. International companies and governments are severing partnerships and business ties with Russia in an effort to starve its war engine. In the event of a prolonged war, these measures will affect virtually every asset class, including cryptocurrency.

It might feel unseemly to the average investor to pore over their portfolio while people are dying. This is a time more suited for prayer, activism, donations, or fighting. But economics has always been a major component of warfare. If the goal is to make Russia’s economy hurt so bad that the calculus of war no longer makes sense to them, then all other nations must steel themselves for their own economic sacrifices, confident that they can outlast a lone, hostile actor.

The Russian ruble is crashing. Moscow may take more managerial control of banks in order to mitigate a tanking market. Their government will also probably take a firmer approach on how its news agencies present the sanctioned narrative to citizens. This is how things are done in state-controlled regimes. Every war has an element of attrition, and we shall soon learn which ideals each nation considers non-negotiable.

Economics was the primary driver of the dissolution of the Soviet Union. Perhaps it will once again play a pivotal role in eastern Europe. If you have an opportunity to build financial security for yourself, it behooves you to do so. Every geopolitical upheaval and ensuing uncertainty should be a sobering reminder of that duty.