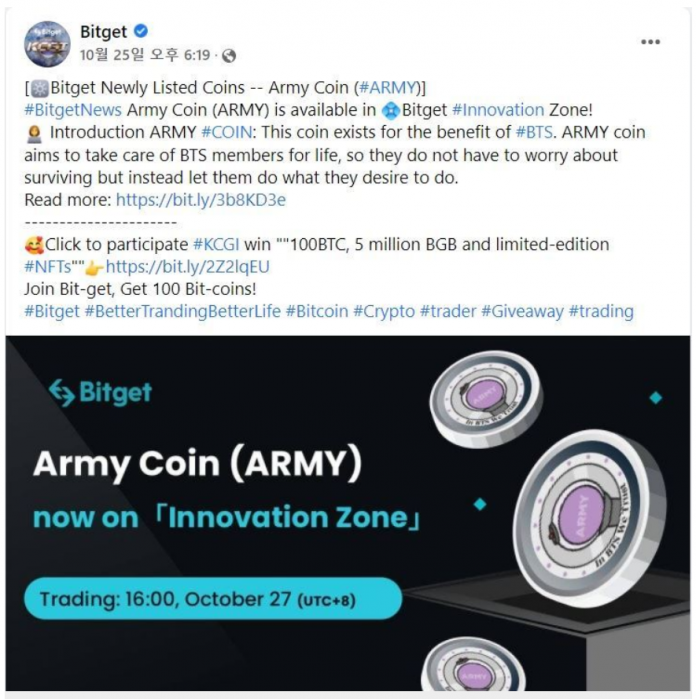 HYBE, the management company for K-pop sensation BTS, said it would take legal action against a cryptocurrency named after ARMY, the BTS fandom.

The Seoul-based music label said the cryptocurrency has nothing to do with the boy band.

The label announced the move Thursday, a day after the ARMY token price jumped to 50 times its initial value during the first day of its trading.

The coin’s trading platform, Bitget, said in an online message last week that the ARMY Coin is designed to benefit BTS.

“BTS photos were used to promote the coin without any prior consultation with the band’s agency,” HYBE said in a statement.

“We are checking whether there are any legal violations, including the infringement of BTS members’ portrait rights. We will take all possible legal actions for any violations,” the company said.

This is not the first time that HYBE has issued a warning against cryptocurrency that use the name of the company or its artists. Earlier this year, the firm said that it was not involved in any blockchain businesses.

The token is minted to attract players who take part in a tournament of six games, just like in the show. The play-to-earn token will be used only in a game in which the winner will take almost all of the issued coins.

However, CoinMarketCap issued a warning that it had received multiple reports that users struggled to trade the token in a popular exchange. Therefore, investors are advised to exercise caution in trading the coin.