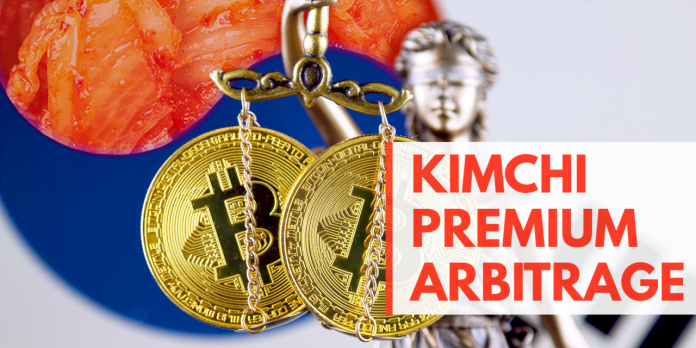 Bitcoin’s near-vertical rally to over $35,000 in the past weeks has brought back the so-called “Kimchi Premium,” data from on-chain analytics provider CryptoQuant showed.

Named after a popular dish in Korea, the Kimchi Premium refers to higher prices for cryptocurrencies—especially large-caps like Bitcoin—on Korean exchanges in times of high volatility. Such moves were largely prominent in early 2018, when the premium shot up a staggering 54%.

The premium usually fluctuates by 1% on average. However, on Monday, it rose to 5.5%, with the trend continuing on Tuesday morning.

The move suggests an increased interest in crypto trading in Korea, noted Doo Wan Nam, the head of business development in Asia for governance protocol Maker. “The Korean community has been pleasantly surprised by the recent uptick in Korean Premium. For most of 2020, there was actually a Korean discount of 1-3%,” he told Decrypt.

But the premium is not a result of Korean traders wanting to pay higher prices for Bitcoin. Research from 2019 suggests the difference arises due to the Bitcoin/Korean Won trading pair being more predominant in Korea compared to the Bitcoin/Dollar pair in other locations, and the corresponding exchange difference between the Won and the US Dollar.

Usually, such opportunities (for other highly liquid Bitcoin/fiat pairs) are closed out by arbitrage traders using this route: Buy the lower-priced asset, transfer to an exchange where it’s selling higher, sell for fiat, and pocket the difference.

However, strict capital controls in Korea prevent the above from occurring. “The Korean Won is a restricted currency, which limits the ability for easy currency conversion and cross-border transfer. Without the conversion path, the arbitrage loop cannot be closed by arbitrageurs,” said Jonathan Leong, founder of Taiwanese crypto exchange BTSE, in a note to Decrypt.

But despite the arbitrage being difficult to close, some traders consider the rising premium to be an indicator of rising sentiment—and perhaps prices—for Bitcoin in the future. “The 2017 bull run was marked by a constant kimchi premium throughout the rally, it particularly shot up during the local tops,” said Mohit Sorout, founder of crypto trading firm Bitazu Capital.

He added, “Now is the first time since July 2019 that the premium is back up again going as high as 6.35% a few days back. This may mark a local top but a sustained premium for weeks would signal a raging bull market ahead.”

Meanwhile, the premium lives on. As of press time, Bitcoin sells for $31,267 on US-based crypto exchange Coinbase, but on Korea’s Bithumb, it sells for $32,577—a 4.1% difference. But as with all things attractive, it’s hard to get.

Shaurya Malwa(2021.01.05) The Bitcoin Premium on Korean Exchanges Is Back
retrieved from https://decrypt.co/53159/the-bitcoin-premium-on-korean-exchanges-is-back