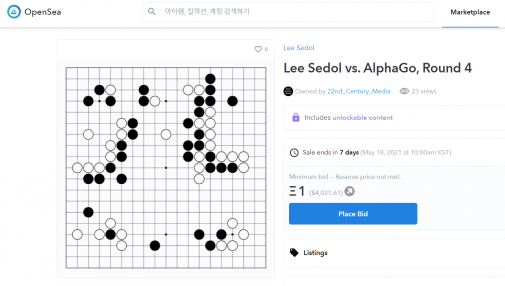 On Tuesday, an NFT of Lee’s victory against AlphaGo was put up for auction on the NFT marketplace, OpenSea.

Lee secured his first victory against AlphaGo after a total of 180 moves in a match held in Seoul on Mar. 13, 2016. Out of the 74 official matches played by AlphaGo, this was the first time for a human player to beat the AI program.

Lee defeated AlphaGo with his 78th move, after which AlphaGo blundered repeatedly until finally resigning on Move 180. Since then, Move 78 has been dubbed a “divine move” in the Go community.

Lee’s NFT is unique because instead of simply containing hash functions that signify the ownership of the artwork, the token is a digital recreation of his game against AlphaGo. The metadata contains an alphanumeric sequence that maps the entire game — thereby allowing the owner to relive the game which is immortalized on the blockchain.

The NFT’s video file displays a Go board where black and white stones are laid out in the order prescribed by the alphanumeric sequence, including Lee’s Move 78. The game concludes with AlphaGo’s resignation, followed by Lee’s signature.

Regarding the NFT, Lee said he was fascinated by the concept of sharing a digital memorialization of something on a blockchain.

“The NFT symbolizes not only my game with AlphaGo but my entire 25-year career as a professional Go player. It would make me happy if people acknowledged the NFT as having its own artistic value,” said Lee.

“But Lee Sedol’s NFT is its own work of art, a digital artwork that depicts his fourth game against AlphaGo. In that respect, it’s an important experiment that opens up new possibilities for NFTs and their value potential,” Yoo said.