The list of Toss bank’s major shareholders stated in the revised corporate disclosure of 2021, which Toss bank sent to Block Media, did not include Alameda or Maclaurin Investments Ltd. which is owned by Alameda. (*Table: Major shareholder list) 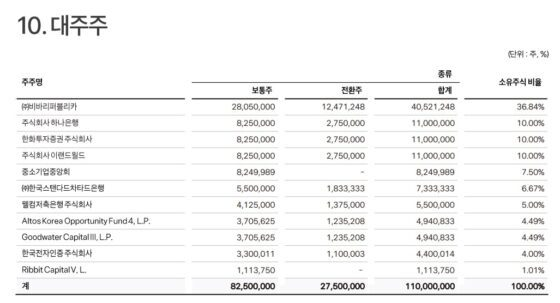 However, Alameda’s investment in TOSS is clearly presented in investment details and is also stated in the FTX Chapter 11 bankruptcy filing materials released by the Delaware Bankruptcy Court.
In response Block media has repeatedly asked TOSS, the largest shareholder of Toss bank, for confirmation of these details.

A TOSS official stated “If TOSS is mentioned in the investment details, it seems to be referring to Viva Republica, the largest shareholder of Toss bank.”

Block Media requested TOSS to disclose Viva Republica’s shareholder list and to confirm additional details. In response, TOSS officials stated “It is difficult to disclose shareholders other than those with 5% or more shareholding, which is compulsory to disclose in the business report.”