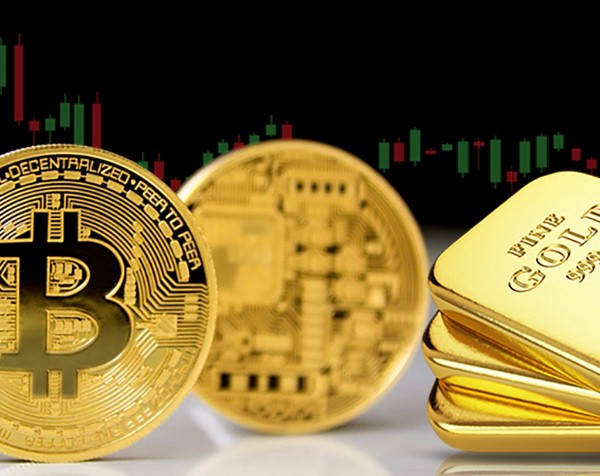 Bitcoin is back in spotlight as it has continued an upward spiral amid lingering uncertainty caused by the fallout of the COVID-19 pandemic, sparking debate over the future course of the digital currency.

Opinion is split over whether bitcoin could replace gold as a safe haven asset.

Some say this is possible since the gold price has peaked and bitcoin is increasingly being embraced by institutional investors who tend to seek stability over short-term profit.

Others say this claim lacks merit because the speculative asset with high price volatility has a variety of “operational” risks.

Rick Rieder, BlackRock’s chief investment officer of fixed income, said in a Nov. 20 interview with CNBC that bitcoin is here to stay.

Some say the endorsement from BlackRock, a New York-based global investment management firm with nearly $8 trillion in assets under management, is the latest sign of a validation that bitcoin is increasingly becoming part of the mainstream financial world.

Some strategists at the world’s largest asset management firms, including JPMorgan Chase, say that the cryptocurrency could replace gold one day as a go-to safe haven investment.

The American investment bank’s strategists said, according to BNN Bloomberg, “Money has poured into bitcoin funds and out of gold since October, a trend that’s only going to continue in the long run as more institutional investors take a position in cryptocurrencies.”

According to JPMorgan, the Grayscale Bitcoin Trust, a listed security popular with institutions, has seen an inflow of almost $2 billion since October, compared with an outflow of $7 billion for exchange-traded funds backed by gold.

Others say bitcoin has already replaced gold as safe haven asset to a considerable extent given the drop in the price of gold and corresponding jump in bitcoin price. This, they say, is counterintuitive given investors tend to buy gold amid high expectations of a massive fiscal stimulus with inflation factored in.

Blockchain expert Choi Hwoa-in said the price will continue to rise while some ups and downs are expected along the way, which she views as a strong indication of continued demand for the cryptocurrency as a new asset class.

“The gold market is rather opaque compared to the cryptocurrency market, a reason many investors are turning to the digital currency,” she said.

“Institutional investors prioritize stability over short-term profit, and their joining in can offset volatile price hikes to a degree,” said Choi.

Standard Chartered Bank Korea investment strategist Hong Dong-hee said the recent drop in the gold price can be explained by the recovery of bullish sentiment in the stock market.

“The total in gold holdings tied to exchange-traded funds around the world stands at around 10.6 billion ounces as of Dec. 9, following a peak of 11.1 billion ounces, Oct. 15. Gold itself will not be completely replaced by other investment vehicles as a safe asset, but is losing its luster considerably,” he said.

But Antonio Fatas, an economics professor at INSEAD, said he disagrees with the view of Rieder, since bitcoin is an asset that was designed to be a means of payment but is not being used as such.

“It has failed in its objective after being around for more than a decade. It remains a speculative asset with incredible volatility in its price and with significant operational risks going forward. Thinking of such an asset as a safe haven asset just makes no sense,” he said.

There still are opinions that bitcoin will not be able to shed its negative image associated mostly with its speculative nature. But the greater problem, according to the INSEAD economist, is that it has yet to prove that it is a valid form of currency.

“It is not a matter of a negative image. Bitcoin has not proven that it is a valid form of money and I doubt it ever will.”

As for the question whether the function of bitcoin will be limited if the Central Bank Digital Currency (CBDC) comes into the picture, he said it would not.

“CBDC is not a Bitcoin killer,” he said.

Bitcoin today is not a medium of exchange, it is not being used in payments because there are plenty of alternatives that offer greater value to consumers, can be scaled up and are gaining traction everywhere.

“Electronic wallets are being used in many countries including Korea. Contactless payments by accessing bank accounts has become the norm everywhere. That is what is killing Bitcoin, the fact that forms of digital money are everywhere and they are superior to bitcoin.”

“I don’t think bitcoin will fully substitute for gold as investors may not fully trust bitcoins. First of all, price volatility is much bigger than gold and the supply ― the number of bitcoins ― is very uncertain. I still think there will be a preference for gold and expect its price, and that of other precious metals which can serve as store of value, to go up.”