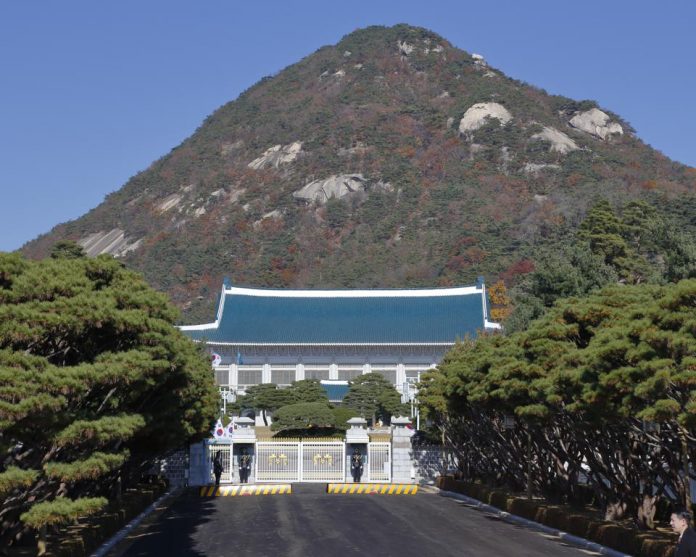 Cheongwadae—also known as the “Blue House” for its blue roof—is the official residence and executive office for the President of South Korea. In a bid to overcome the crises, South Korean President Moon Jae-in addressed business leaders from 9 key industries. In an unofficial translation on the Office of the President, President Moon Jae-in said, “For its part, the Government will strive to nurture future technology professionals while supporting Korean companies’ efforts to innovate. We are expediting the training of experts in such new industrial areas as artificial intelligence, big data, blockchain technology, future cars, drones, intelligent robots, smart ships and biomedicine.”

“I am confident that if businesses, the Government and the people all join forces, we will be able to surmount the industrial crisis caused by COVID-19 and be reborn as a powerhouse in an era of the digital economy,” said President Moon Jae-in. In light of global economic uncertainty, Korea is taking ample measures to foster blockchain innovation—not only from a legislative stance—but also from a progressive stance towards cryptocurrencies as a whole.

A short background of Korea’s viewpoint

South Korea was not always pro-crypto and this can be traced back to the crypto bull run of 2017. During the bull run, a large percentage of South Koreans invested, in so much that, South Korea became one of the biggest markets for bitcoin. The term “bitcoin zombies” emerged—referring to people addicted to checking the price of bitcoin.

When the bull market took a massive dive in 2018, many South Koreans lost a lot of money—and some even lost their houses in the process. It didn’t take too long for the Korean government to intervene and blacklist ICOs. Government intervention was also likely to be largely influenced by other cultural aspects, such as:

● Suicide: According to the World Health Organization, South Korea has the fourth-highest suicide rate in the world.
● Gambling: South Korea is home to 23 casinos. By law, only one casino is available for South Koreans to gamble, located in a remote area in the countryside.

The South Korean government has been working with local blockchain advocates to help introduce more concrete legislation surrounding the treatment of virtual assets. Simon Kim, CEO of proprietary blockchain venture fund Hashed, is one such advocate. Hashed is a significant backer of Asian blockchain projects including Klaytn and Terra. Kim is a director of the Korea Blockchain Association and is also involved in government initiatives around cryptocurrency regulation.

In an interview, Kim told me that the Korean Financial Services Commission does not regulate proprietary funds (a fund that invests with their own capital) in the same way that the SEC regulates US-based venture funds—proprietary funds are not required to submit periodic fillings via the FSC, Form Ds or disclose their information to the public. Depending on a funds registration status, it can either be launched under the FSC; or the Ministry of SMEs and Startups (MSS). However, publicly listed companies are required to submit similar information to that of U.S. companies and disclose periodic filings.

July 2020, saw the rollout of a new tax ruling that will tax gains on cryptocurrency at a rate of 20%. Kim also advised the government in the drafting of a March bill that ensures Korea complies with FATF guidelines regarding virtual assets (VAs) and virtual asset providers (VASPs). This includes legal definitions, and the requirement of virtual asset service providers such as cryptocurrency exchanges to report to the Financial Intelligence Unit.

Speaking of the move towards a more regulated blockchain landscape for Korea, Kim said “Although lack of clear regulation brought certain freedoms, it has ultimately been a bottle neck for blockchain related businesses in Korea. The new regulations mark a fresh beginning for Korea as it takes its first step to create a more hospitable environment for VAs and VASPs.”

Kim also believes that this approach is helping Asia to spearhead blockchain innovation, in comparison with the often draconian approach of the US SEC. He added: “While western projects such as Telegram’s TON have been cancelled and Facebook’s Libra delayed, Asian platforms have successfully launched and continue to onboard users. Among these are Samsung’s blockchain integration into its Galaxy smartphones, and Terra’s Chai mobile payment initiative.”

The South Korean government has also been experimenting with various blockchain legislative initiatives. In April last year, the government set up 14 special regulation-free zones with 84 regulation-related exceptions. Out of these zones—the Busan crypto regulation-free zone, modeled after the Swiss town of Zug—represented a major shift in government attitude towards cryptocurrencies and blockchain technology. However, this didn’t come without speculation, with some accusing the government of “choking” innovation.

In relation to these special regulation-free zones, President Moon Jae-in said earlier this year, “Now tests related to such new industries as telemedicine, blockchain and the hydrogen economy can be conducted, and innovative industries are being created through the strengths of provincial areas.”

This month, Haeundae Beach—one of the most popular locations in the Busan crypto regulation-free zone—is expected to begin accepting crypto payments such as bitcoin and ethereum for watersport fans. The intention is to turn Haeundae Beach into a “crypto beach,” however, these plans are likely to be delayed as the Busan area was recently hit hard with an intense monsoon—a common occurrence during the months of July and August.

Furthermore, President Moon Jae-in went on to say that, “The Government will further accelerate regulatory innovation while enhancing the strengths of local areas through decentralization.” In regards to decentralization, the South Korean government proposed an amendment to the Local Autonomy Act, that if passed, will transfer administrative authority from central to local governments in these special regulation-free zones.

The decentralization experiment has been dubbed as a “one-step model.” The idea behind it—if there is a mechanism for compromise in place that supports small concessions to take a large step forward—then this will lead to a breakthrough in regulatory innovation. In light of this one-step model, last month, the South Korean government revealed that it granted the South Korean province Gyeongbuk, a permit to run a “Special Industrial Hemp Free Zone.” The zone will allow the province to industrialize medical hemp on the blockchain—a major shift from conservative thinking to progressive.

The global race for CBDCs

In response to China’s CBDC, the U.S, Australia, the Philippines, the European Central Bank, and many other countries are now considering rolling out CBDCs. This may bode well for crypto; however, not all are in agreement. Some have speculated that central bank digital currencies have nothing to do with cryptocurrencies—and are just a solution for a cashless society.

The Bank of Korea (BOK) originally had no interest in creating a Korean central bank digital currency (CBDC). Since then, it has now changed its tune. In March this year, the BOK began reviewing the issuance of a Korean CBDC and is now working on a 22-month pilot scheme that will see a build and test of the CBDC pilot system in 2021.

With economic uncertainty, inflation concerns, quantitative easing, governments racing towards CBDCs in reaction to the looming Chinese digital Yuan—when looking to the future, how will the 2020’s be remembered: As COVID-19; the black swan stock market crash; a global currency war; or the golden era of bitcoin?

Luke Fitzpatrick(2020.078.04) The Blue House Is Taking Initiatives To Position South Korea As A Blockchain Hub