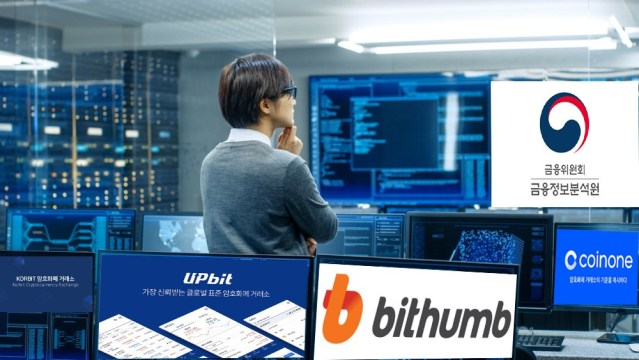 The major four cryptocurrency exchange markets in Korea are negotiating for their real-name account contract renewals with major banks. Though the contract was not renewed yet, they all seem relieved as the renewals are practically done. However, it seems that the legal circles of Korea do not see it in the same way they do.

Bithumb and UPbit had successfully renewed their contracts in time with counter banks before their former real-name account contracts expired on Aug 1. Korbit is at the final adjustment stage. Therefore, Bithumb and UPbit may conduct the KRW-cryptocurrency transaction, whereas Korbit and Coinone are suspended from trading KRW.

As Bithumb and UPbit concluded the contract with the banks, they are good to go for another six months. It even may give them a comparative advantage over competitors. Users of Korbit and Coinone currently can’t conduct the transaction, but it is only a matter of time as they have reached a verbal agreement.

◇ Even after complying FATF proposal, still risky for Banks
The legal circles of Korea believe that the exchange platforms should not be relieved even after the successful renewal of contacts. It is because the banks will be extra cautious for the mutual evaluation of FATF (Financial Action Task Force on Money Laundering) planned in 2020. Most banks forecast that the Korean government’s compliance with the FATF proposal will not be enough to meet the regulation level where the banks can be relieved.

FATF is planning to review the compliance status of regulatory authorities of each country in June 2020. FATF has proposed a recommendation to impose AML (Anti-Money Laundering) due diligence to cryptocurrency exchange platforms almost at the same level as financial companies. It includes a provision saying that the exchange platform not in compliance with it will have its license canceled. As Korea is one of the members for the mutual evaluation, the regulation according to FATF’s proposal should be conducted within a year.

Cho Wonhee, a lawyer of D’light law firm, said, “If the government plainly complies with the proposal, banks are obliged to report information of remitters and recipients. Also, the banks will probably be responsible for any violations of the exchange markets due to the subtle AML provisions.” He also said, “For the banks to renew the contract, all system of the exchange platform from head to toe should be examined. That is the only way to estimate the risk the banks are taking.”

An anonymous lawyer said that there is not much profit for the banks from the partnership with the cryptocurrency exchange platforms. Therefore, there is no reason to renew the contracts for the banks under such a high risk. The lawyer added that though he can’t tell the details, already many of the banks see the real-name contract very skeptical.

◇ “No Country for Exchange Markets”
The negative stance which the government has been shown over the years is another risk factor for the exchange platforms. Many forecasts although the government will comply with the FATF’s proposal, the government would remain a hostile relationship with the cryptocurrency industry.

A source from the legal circles who has a line with the government said that apparently, the government would comply with the FATF’s proposal. However, there will not be any policy for those cryptocurrency exchange markets. The source added that the government will only apply the essential provisions of the proposal such as AML and not apply the entire recommendations for better cryptocurrency platform’s user experience. He is expecting more on the policies that improve local currencies or payment gateway field.

Small exchange markets could eventually be closed if FATF regulations are further strengthened. Notably, the AML duty as ‘the same level as financial companies are complying with’ is the part where the small and medium-sized exchange platforms are having difficulties with.