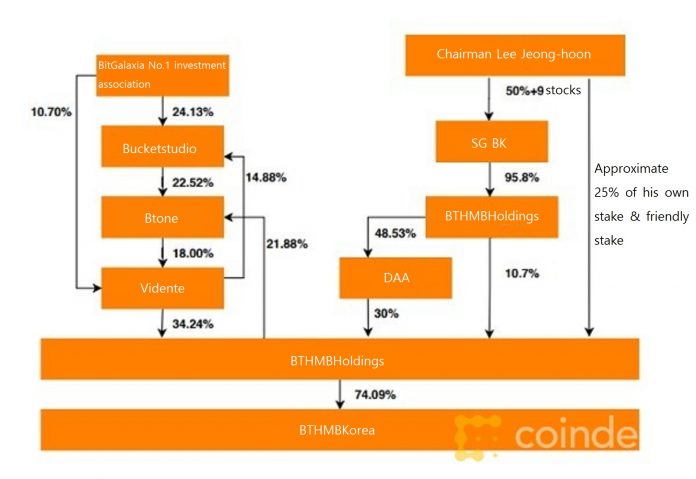 According to a report by CoinDesk Korea on the 28th, the largest shareholder of Bithumb is a chairman Lee Jeong-hoon. He dominates Bithumb through foreign corporation SG BK (SG BRAIN TECHNOLOGY CONSULTING PTE.LTD), BTHMB Holdings and DAA.

Bithumb’s corporate governance (As of December 31, 2019). Chairman Lee Jeong-hoon dominates Bithumb Holdings, the holding company of Bithumb, with a stake of about 65%, including his friendly stake. Source=CoinDesk Korea

The largest shareholder of BTHMB Holdings is SG BK, a Singapore corporation, and Lee Jeong-hoon currently holds more than 50% of its stake. This is the point of the corporate governance of Bithumb. An official of Bithumb said, “In addition to the stake through SG BK, Lee Jeong-hoon has friendly stake of approximately 25% including his own stake in Bithumb Holdings.”

Bithumb has been reluctant to disclose its corporate governance. Until Chairman Lee Jeong-hoon appeared in the media, it never even expressed its stance about the real owner of the company. Therefore, there are many speculative articles despite the fact that it is difficult to figure out the real owner because the main affiliates include unlisted companies and foreign corporations.

Kim Jae-wook, the CEO of Vidente who has been considered several times by the media as the owner of Bithumb, is another axis of the corporate governance. It continues from CEO Kim Jae-wook to BitGalaxia No.1 investment association, Bucket Studio, BTOne and Vidente. Ultimately, he exerts his influence on Bithumb through Vidente’s stake in Bithumb Holdings. Vidented holds the largest stake as a single company, but its impact is limited based on the structure of all affiliates.