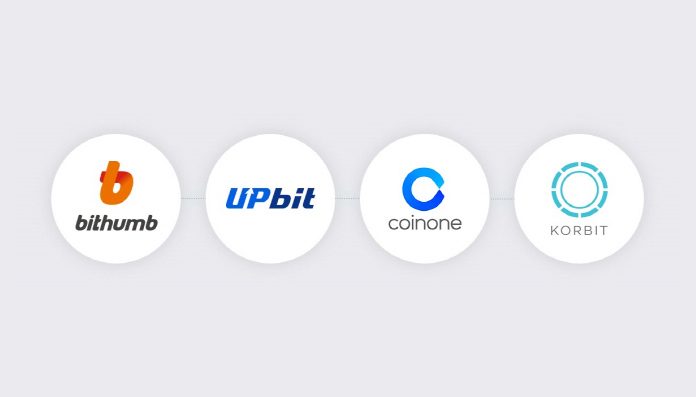 As Know-Your-Customer (KYC) due diligence are becoming requirements for exchange platforms, contracts with banks are critical. If they can’t receive real name accounts information from the bank, they cannot exchange the cryptocurrencies with Korean Won.

On July 30, an industry official informed that the real name account contracts of the major exchange platforms such as Bithumb, Upbit, Coinone, and Korbit are expiring at the end of July.

The real name account is a system in which the deposit and withdrawal is only permitted to the users who use the same bank account the exchange platform uses. It was adopted after the implementation of the ‘Real name cryptocurrency transaction system’ by the Korean government in January 2018.

Currently, Bithumb, Coinone, and Korbit have concluded the real-name account contract each with the NH Nonghyup Bank, IBK Bank, and the Shinhan Bank respectively.

These exchange platforms must negotiate for the extension of the contract with their main banks in every six months.

Bithumb was the first cryptocurrency exchange platform to extend its contracts with the bank after the blockchain industry was worried due to heightened standards suggested by the FATF.

Bithumb was rated ‘Qualified’ in all eight categories of the site inspection by Nonghyup Bank and is extremely likely to extend the contract for an additional six months.

The Nonghyup Bank examined on Bithumb on the verification of identity information of users;  separation of corporate capital and clients’ deposit and transaction funds; separated management of transaction history by the user; and compliance with the government policies on cryptocurrencies.

Bithumb explained that this was the result of prolonged efforts to protect its customers’ asset protection. Also, they have established a money-laundering prevention center for the first time in the Korean blockchain industry in June. They have been strengthening cooperation with Nonghyup Bank to prevent frauds such as voice phishing.

Rumor has it that Coinone, which is in contract with the Nonghyup Bank, will soon sign in the renewal contract of real-name accounts as well.

Upbit also concluded the negotiations with the IBK Bank. However, the IBK Bank is only issuing real-name transaction accounts to the existing clients which subscribed before the adoption of the real-name financial transaction system and still is maintaining the policy of not issuing bank accounts to new clients.

Korbit is implementing positive negotiations with the Shinhan Bank. The Shinhan Bank official implied that renewal would happen in the future, stating that they are preparing for the extension of the contract. However, Korbit is currently not transacting with real-name accounts. It is because Shinhan Bank has received a report of bank fraud and suspended the payment of the main account of Korbit ever since. It is estimated that the suspension will be lifted after the Korbit renews the contract.

Exchange platforms seem somewhat relieved as the contract renewal with banks are being concluded. The industry was concerned about heightened regulations that Korean governments may enforce shortly.

The amendments of ‘Act on Report on, and the Use of Specific Financial Transaction Information.’ which includes these recommended criteria of the FATF is already pending in the National Assembly.

It seems that the regulatory compliance issues will increase the gap between the major four exchange platforms and the rest. Currently, the four major exchange platforms, Bithumb, Upbit, Coinone, and Korbit, are the only platforms complying to the real-name financial transaction system.

Personnel from the industry said that the extension or new opening of real-name accounts became difficult as the regulations on abnormal financial transactions and the money laundering prevention are fortified. The banks, however, tend to appreciate the cryptocurrency exchange platforms that try to meet these regulations. He added that the case is only limited to large exchange platforms, and the small platforms have a weak system and human resources; therefore, they would not be able to receive real name transaction accounts.